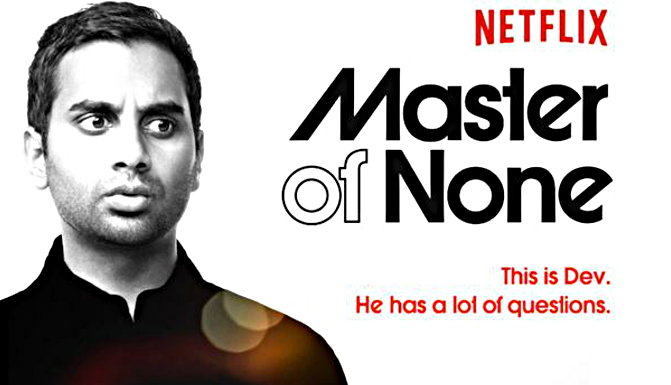 For those of you who don’t know him, Aziz Ansari, got his start as a comedian and is best known from his role as Tom Haverford on the NBC show Parks and Recreation. Recently, he wrote and starred on a Netflix-released series called “Master of None”.

They say a great comedian is funny because their comedy always contains a kernel of truth. Although advertised as a romantic comedy,  by the end of the first episode, surprisingly, I wasn’t laughing. I was something else entirely. I was watching a reflection of myself. And a lot of my thoughts in the last decade. Master of None turned out to be a fascinating, spot-on window into the modern Millennial’s perspective on life and work.

The aptly titled Master of None shows what a thousand words can’t: the constant decisions (rather, indecision) facing the everyday Millennial. Where the majority of shows are about teens and tweens or 30s and above, Master of None targets the life of the growing number of single Millennials in their late 20s. Yes, that’s right: the Millennials that delay starting a family in pursuit of that ever-fleeting fantasy: The Dream Job. The Millennials that grew up in a more privileged, technology-driven world. The Millennials that chase experiences and passion over paycheck and avoid FOMO (fear of missing out) like the plague. In a nutshell, a generation that strives to be a ‘Jack of All Trades’ and ends up becoming a ‘Master of None’.

The original premise of Master of None was based on Ansari’s reading of The Paradox of Choice by Barry Schwartz and, subsequently, his own book, “Modern Romance”. If you’re interested in more reading about the theme of Paradox of choice and Ansari’s inspiration, check out this great article in Business Insider, that breaks down the effect of choice on people today.

If you’re an executive or an HR manager, you’ve probably wondered what drives Millennials, what they think on common topics, and how they think through situations. Following the journey of Dev and his friends, this show takes you on a journey discussing Millennial perspectives on everything from dating to career paths, not to mention the constant use of Google, Uber, Yelp, and other ubiquitous modern tools to decide and learn about everything.

Throughout the series, Dev embodies the constant FOMO syndrome that leads to indecisiveness and lack of loyalty, to friends, to family, and to employers. And the end? Well, it’s so Millennial, I won’t spoil it.

If you’re planning on binge-watching anything this holiday season (like I probably will), consider watching Master of None. It’ll probably be one of the most educational things you could do to wrap up 2015. I can’t promise that every Millennial can relate to Dev and his friends, but I can say the themes of indecision and paradox of choice are ones that many have experienced.

P.S. I am not connected in any way to Master of None or Aziz Ansari. However, thanks and a shout out to Aziz, for capturing the subtlety of our generation with infinitely more accuracy than the multitude of articles in Deloitte, Time, Newsweek, etc. Also, please note this show is not PG. You’ve been warned.

Crystal Kadakia is a lauded speaker, author, thought leader, and consultant for Millennials, Multi-Generational Workplace, and Modernizing the Workplace. She is considered a unique resource and requested by executives and organizations to bring practicality and rigor to applying Millennial insights in today’s world. What are your 2016 programming plans? We are experts in helping you meet your multi-generational workplace challenges. Invite us to give a custom talk at your organization.