"As co-founders of Culture of Good, Inc., which inspires more than 3,000 millennial employees to do meaningful work, we found The Millennial Myth to be spot on. Not only has Crystal helped to dispel myths that simply hold little truth about the next generation of leader, she has also provided in extensive detail the way forward for those leading them. This book is a must-read for those who expect to have success in leading the next generation of employees."

From new hires to top level executives, the phrase Millennial Generation elicits frustration, polarized discussions, and ample eye-rolling. They’re lazy, they’re entitled, they’ve even been called “the worst generation.” Instead of leaders focused on adapting for the future, these stereotypes support the persistence of an outdated corporate workplace model that fails to attract, engage, and retain modern talent. Crystal Kadakia, who is a Millennial herself—as well as an OD consultant, two-time TEDx speaker, and engineer—argues that correcting the misunderstanding behind these stereotypes and reestablishing a more holistic, less biased perspective holds clues for critical strategic choices to evolve the workplace as we know it.

Kadakia emphasizes that Millennial behavior is rooted in their childhood—they’re the first generation to grow up in a fully digitally-enabled world. And since digital will be a part of future generations, studying Millennial behavior isn’t simply about embracing diversity, it’s about integrating modern behavior into the fabric of the way your company gets work done. It’s about finally catching up internally with the changes society at large has experienced and ensuring your company has a place in the future.

The Millennial Myth takes on five myths: lazy, entitled, needing constant feedback, disloyal, and authority issues. Through her One Coin, Two Sides model, Kadakia defines the observed Millennial behavior for each and then explores from two angles: the traditional mindset that creates the current stereotype and the modern, Millennial mindset. For example, Millennials are accused of having authority issues because they lack the traditional idea of respect for hierarchy and approach everyone like a friend, including upper management. But growing up with digital has created a new idea of respect due to higher levels of transparency paired with anonymity, where macro-characteristics like age, ethnicity, and gender don’t define contribution. What productivity and innovation can organizations capture if those who were less likely to speak now have a voice?

To help leaders and managers beyond creating new understanding, each chapter is filled with practical tools for specific workplace culture changes. Features include transformation examples, a self-assessment to determine how modern your own organizational culture is, a list of actions you can take in ten minutes or less to begin the process of updating your workplace, and an online resource bank.

The Millennial Myth is your insider’s guide to go from complaining about the Millennial Generation to feeling empowered to create an engaging, profitable place to work!

Crystal Kadakia is the founder of Invati Consulting and a speaker, author, and thought leader for millennial and multigenerational workplaces. She leads projects at several Fortune 500 companies and spent almost seven years at Procter & Gamble as an engineering project manager and a learning and development manager. She has won a number of awards, such as ATD’s “One to Watch” award in 2014, Power 30 Under 30, and the CLO Learning in Practice Award. She is also a Huffington Post and Human Capital Institute blogger.

The Millennial Myth has been featured by:

Preface: Millennials and the Modern Workplace

Introduction: The Perceptions We Hold Today

Chapter 1: Rebuilding the Backdrop for Millennials

Chapter 2: It's Not Lazy, It's Redefining Productivity

Chapter 3: It's Not Entitled, It's Entrepreneurial

Chapter 4: It's Not Hand-Holding, It's Agile

Chapter 5: It's Not Disloyal, It's Seeking Purpose 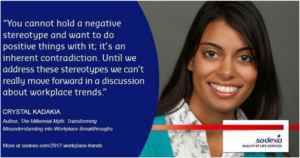 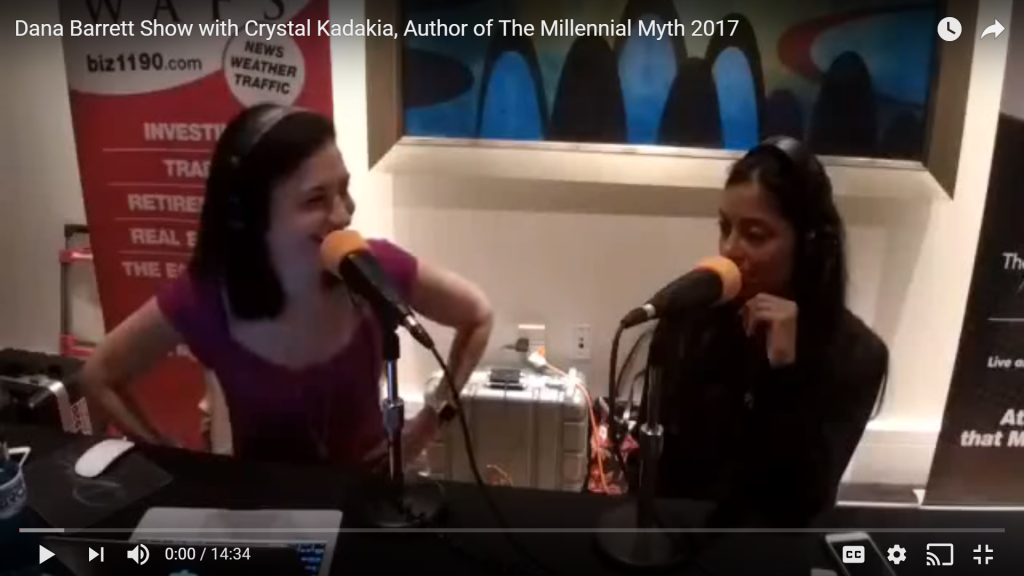 The Dana Barrett Show, Live from Atlanta's Best and Brightest Companies to Work For 2017 Awards Show

There has been and probably always will be a culture clash when a new generation enters the workforce. With new technologies emerging every day, the clash between Millennials and their elders seems more pronounced than ever. Crystal Kadakia, author of the new book The Millennial Myth, joins us to talk about some companies that are accepting the cultural differences between generations and adapting to the changing workforce. 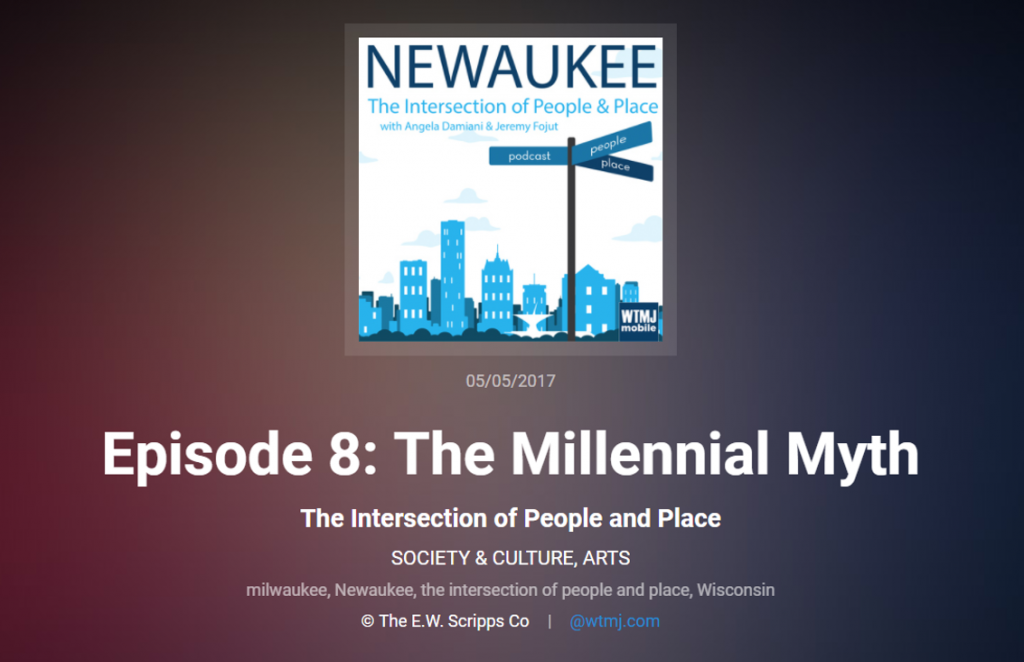 Podcast from Newaukee, one of our featured case study organizations in the book 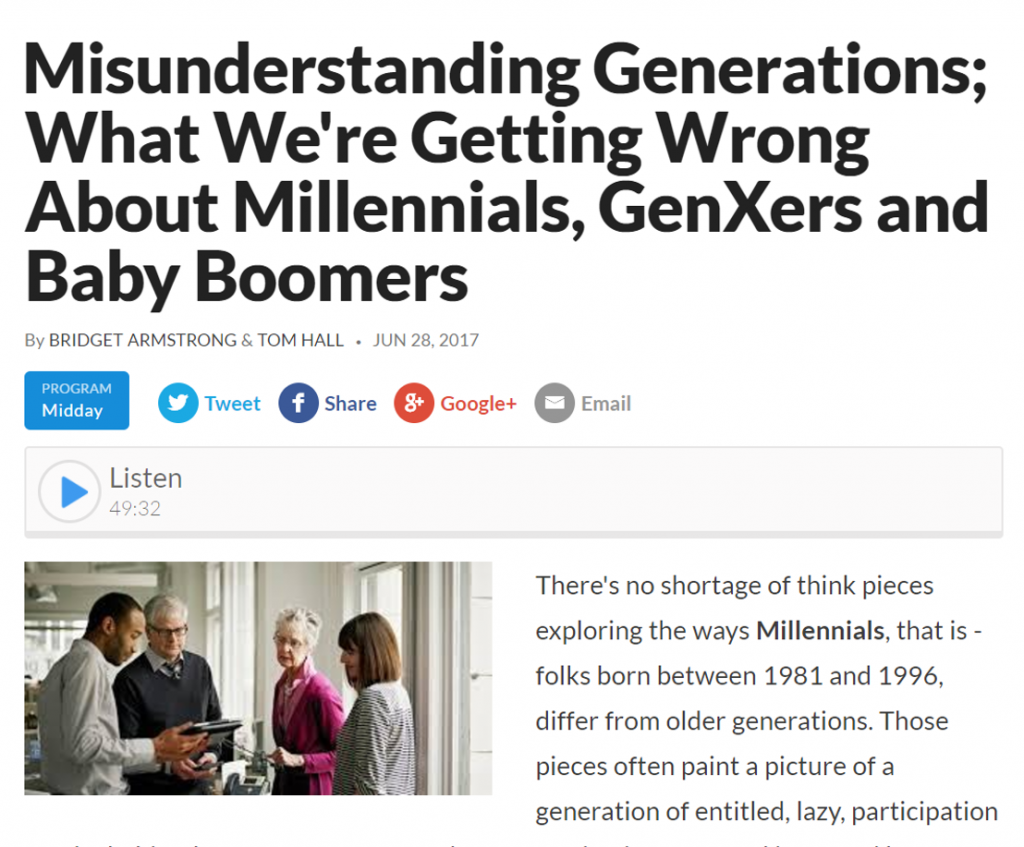 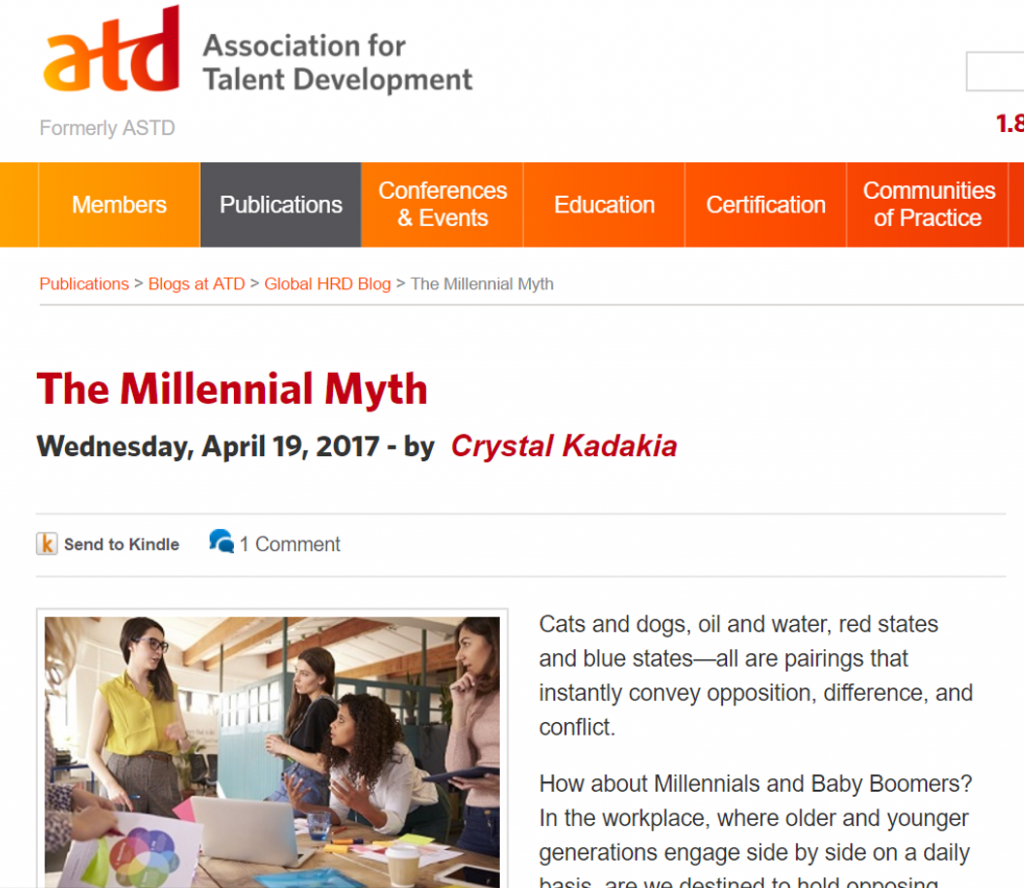 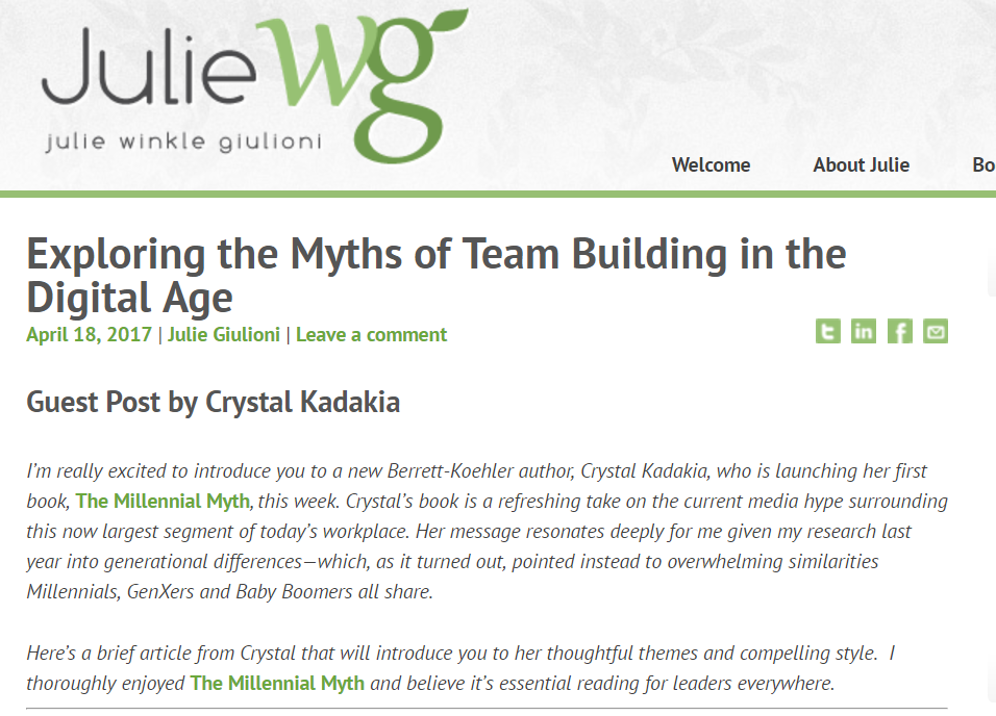 Help Them Grow, Or Watch Them Go author features Crystal